Book one of Agamemnon Frost

Decorated artilleryman Edgar Mason was forced to find new work when the British Empire replaced its foot soldiers with monstrous machines. Now he waits on the Liverpool elite as a personal servant. He has just one rule: he won't work for fashion-addled dandies.

Agamemnon Frost, however, is far from the foppish man-about-town he appears to be. He's working to protect the Earth from an alien invasion being planned by a face-changing creature known as Pandarus. And on the night he plans to confront the aliens, he enlists Mason to assist him.

For a man to love a man is a serious crime in Victorian England. But when Mason meets Frost, his heart thunders and his blood catches fire. And when Pandarus drags the two men into the torture cellars beneath his house of death to brainwash them, Mason's new passion may be all that stands between him and insanity.

Edgar Mason is ready to embark upon his new life at Agamemnon Frost’s side. But all is not perfect. Through torture, Pandarus, his Martian overlord, has implanted a dark voice in his mind, a voice that urges betrayal. And though he can keep close to Frost, there’s little room for romance under the watchful gaze of the engineers from Station X.

That changes when Mason and Frost reopen their investigation into their old enemy’s whereabouts. Posing as double agents and investigating cryptic rumors of “hollow ships,” they find him impersonating a London banker and worm their way into his confidence.

But their success brings them trouble in spades. Pandarus takes them into the belly of his ships, where he plans to transfigure them into mindless automata. And with Earth on the brink of invasion, Frost’s old flame Theodora reappearing, and Pandarus’s brainwashing growing more effective, Mason and Frost will find their bond tested as never before.

See how it all began in Agamemnon Frost and the House of Death.

Edgar Mason is losing Agamemnon Frost despite everything they’ve been through—the passion, the torture, the heat. Frost’s fiancée Theodora is back, and Mason can feel his lover gravitating toward her. Every day he sees them together, it tears at his heart.

Frost feels raw himself. His brother and sister-in-law are missing, and his guilt about failing to save Theodora from Pandarus eats at him. His feelings for Mason, whom he has put through hell twice already, just twist the screws tighter.

On top of that, Pandarus and the Martians are back to make their final push to Earth, and Frost and Mason are duty bound to fight them. People are vanishing. Bodies are turning up burned beyond recognition in the slums. The bleak, human-less future Frost and Mason saw in the hollow ships has nearly come to pass.

And in order to prevent it, each man will have to make a final choice. Lose his lover or doom the world.

Find out how it began in Agamemnon Frost and the House of Death. 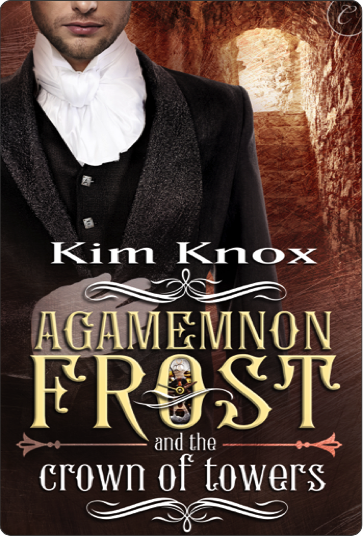